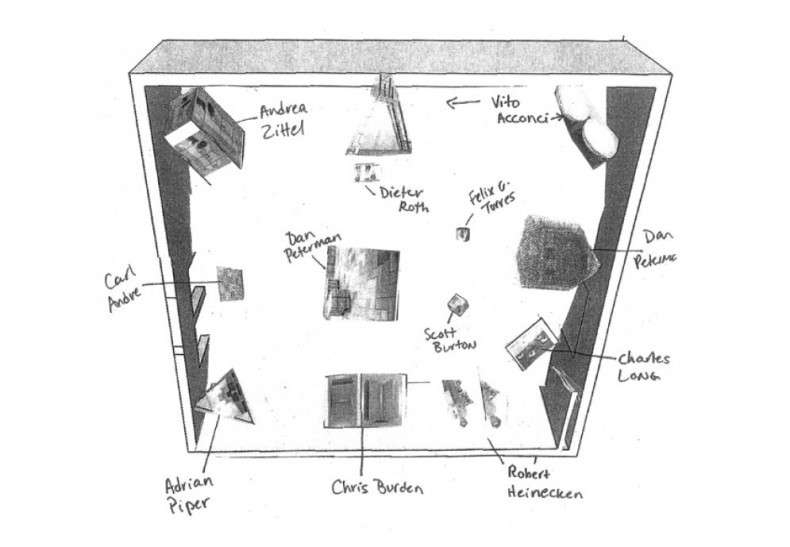 Vinculum (Coincidence) is a composition originally conceived as part of a curated performance series that focused on interactivity between artworks and their audience. Upon approaching the subject of interactivity, we delineated a performance structure in which our movements through space guided and followed the audience around the museum setting, creating constellations of intersecting sound events.

The flexibility of the score generates opportunities for the audience to experience sonic connections, whether real or imagined. The moments of “coincidence” suggested in the title emerge from the becoming of events from four channels of aleatoric playback, combined with the performance of scored procedures for two accordions, and the movements and engagement of individuals in the audience.

The four channels were arranged in a decentralized manner to diffuse performance/audience boundaries. Each speaker played back slight variations on a palette comprising simple and complex tones, breathing rhythms and instrumental artifacts (like crackle, hissing, rattles, etc.)–sourced from bellowed and reeded instruments, and periodic silences. The recordings excite a wide sonic spectrum fluctuating between dispersed identity and momentary fusion.

The two live accordions were kept in motion by three kinds of procedures. Performances of these procedures was motivated by sonic activity as well as particular physical proximities both between the two performers, and also between the duo and their audience.  The three categories of procedures are as follows:

Imitative procedures: particularly mirroring the sounds in the playback, but also the audience’s rhythms of steps, speech melodies, and other on-site incidental sounds;

The duration of each performance was long enough to allow the seemingly automatic unraveling of some events while offering myriad opportunities for shared experiences with and between audience individuals.  This was both music to listen to and music to ignore – and in turn, it both listened to and ignored the audience.

Having experienced countless particulars with streaming audiences throughout the eighteen hours of performance over the course of three iterations, we have been able to parcel a new arrangement for home listening.  Since the dimensions are being flattened from four channels and two performers down to a stereo field, we have arranged a shortened version (the original duration being 120 minutes in a live setting) to roughly the length of a CD. We have found this to be the best duration in which to explore the multidimensional aspects and peaks that were present in many of the performances.

Since there is no “live” element or spatial acoustics in the recording, the confusion of performance versus playback that was implicitly sought in live settings is no longer an active agent.  Spacial disorientation may derive from the flattening of both sonic dimensions of all the recordable aspects. In correspondence with this, the CD arrangement of Vinculum (Coincidence) is liable to equate shifting circumstances and effectual experiences.